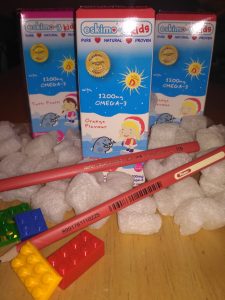 About 4 months ago I started the boys on Eskimo-3 kids. It was purely by chance actually. I was working at one of our stores Grand Opening when I spotted a large display of the Eskimo-3 products. I had heard of its advantages especially the fish oils for concentration before, but apart from that I didn’t know a whole lot about the product. So I got talking to the rep that was there on the day and she explained some of the benefits the Eskimo-3 Kids has.

Now I am not going to go into the science behind the product or all the ingredients it has because as a busy mum of very active 6 year old twins, I wanted to know the benefits not the “features”.

What Eskimo 3 Kids says it does:

We have always been told, “Fish is brain food” and that is true. Fish gives us valuable Omega 3 fatty acid DHA.   To put it simply, these Omega 3 fatty acids act as “building blocks for our children’s brains. Without them children find it difficult to concentrate or remember things and most especially control their actions or moods. Eskimo 3 kids has even helped children diagnosed with ADHD and Aspergers. I like to think of the Omega fatty acids as WD40 for your brain, the oils just keep everything running soothly and nothing gets “rusty or stuck”.  But we simply do not eat enough of it to feel the benefits, especially kids. I am lucky my 3 youngest love fish especially salmon, but in all honesty if I was to feed them the amount they need to gain Omega 3 fatty acids I would need to change my occupation from Marketing to Fishing!

As well as concentration the Omega 3 fatty acids (DHAs) and Omega 6 and 9 included in Eskimo 3 kids also aid sleep. A school going child ideally needs around 12 hours sleep a night. Lets be honest, by the time you have put them to bed, read them a story, got them another glass of water, heard them go to the loo AGAIN they will probably be up in 3-4 hours for:

c)to tell you the Gruffalo was trying to get him again!

So by the time you are dragging them out of their duvets and into their school uniforms the next morning they haven’t got near the 12 hours they need for their day. We know that lack of sleep lead to health and dietary problems. Studies show taking added Omega 3 will stop this annoying wakening at night time (I am paraphrasing here!)

The Omegas listed above improve the immune system, making children less likely to constantly pick up bugs, colds and viruses. There has been studies done on the relationship between fish oils and asthma. Taking additional fatty acids while pregnant can reduce the risk of your baby developing asthma. Similarly if your child has asthma taking the Omega 3 fatty acids can reduce the amount of asthma attacks they may have or night time coughing episodes. This is because Omega 3 fatty acids are naturally anti-inflammatory and as we know asthma occurs when the airways become inflamed. Similarly taking Eskimo 3 kids can help with skin conditions like eczema as they develop because of the same inflammatory conditions.

My Opinion of Eskimo 3 Kids After 6 weeks:

The twins can be in trouble for talking or shouting to each other or other kids in class. They may not concentrate as well as they should and they were forever losing “happy faces” from their teacher because of their behaviour. From an early age they have been active and mischievous boys, I even wrote a blog post on them click here

So I started giving the boys Eskimo 3 expecting an immediate improvement in behaviour, mood and concentration. Of course after the first few days I stopped waiting on the sudden change because life is busy and there are other things to be thinking about! In fact I forgot about it until about the Easter holidays when the routine was not the same and they didn’t get the Eskimo 3 every single morning. That is when I noticed the difference, once they were not getting the supplement. They were not as calm, they didn’t concentrate and thinking back to before they broke up form school, they had started to keep all their “Happy Faces” in school and the notes home about their behaviour stopped. When they went back to school they rarely finished the school week without a note or a tale about their behaviour. After a couple of weeks back on the Eskimo 3 they settled again.

They finished senior Infants last Friday and they have had 3 “Happy Faces” every Friday since. That is a record! At home they are playing with their Lego more as they seem to have more concentration, they fight less and they listen more.

The twins have always been great sleepers luckily. The only issue I had was them actually going to sleep and one of them waking every single night for a drink. When they have had their story I would beg them to go straight to sleep, but every night they would talk and mess around for over an hour. Now this still happens, but not every single night. They seem to be more relaxed and sleep through the night without looking for their 3am hydration!

My boys have asthma. They have coughing fits which occur at night and leave them vomiting and exhausted. Now, they are on inhalers for this, but the amount of nights I have had to go in to them to give them their relievers has decreased.

The toddler has severe eczema and I was so eager to find out if the Eskimo 3 kids would help him… I never got the chance to see as he simply would not take the supplement. I tried everything to make him take it, in his yogurt, in his juice in his cereal. Nope he would not take it.

So I guess that leads me on nicely to the only drawback I have on the Eskimo 3 Kids, the taste. My twins do not like the taste of the flavours. But because they are 6 and they know and understand its good for them they take it for me. The toddler will not unfortunately! I am going to try him again and disguise it better, maybe at snack time rather than breakfast or dinner. 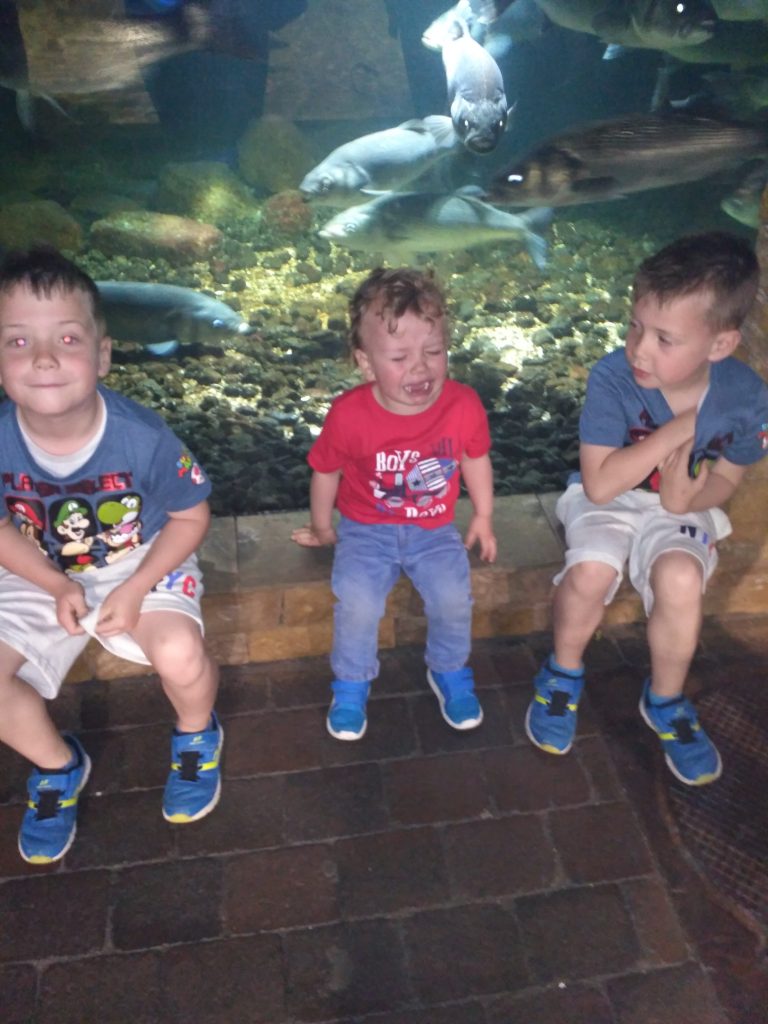 So that is my review of Eskimo 3 Kids, to be honest it impressed me more than I thought it would. I will continue to give it to all three boys throughout the summer and of course when school re-starts.

I purchased my Eskimo 3 myself but Eskimo 3 kindly sent some products for me to giveaway to my lovely readers!!

You can find your nearest Eskimo 3 is stockist here 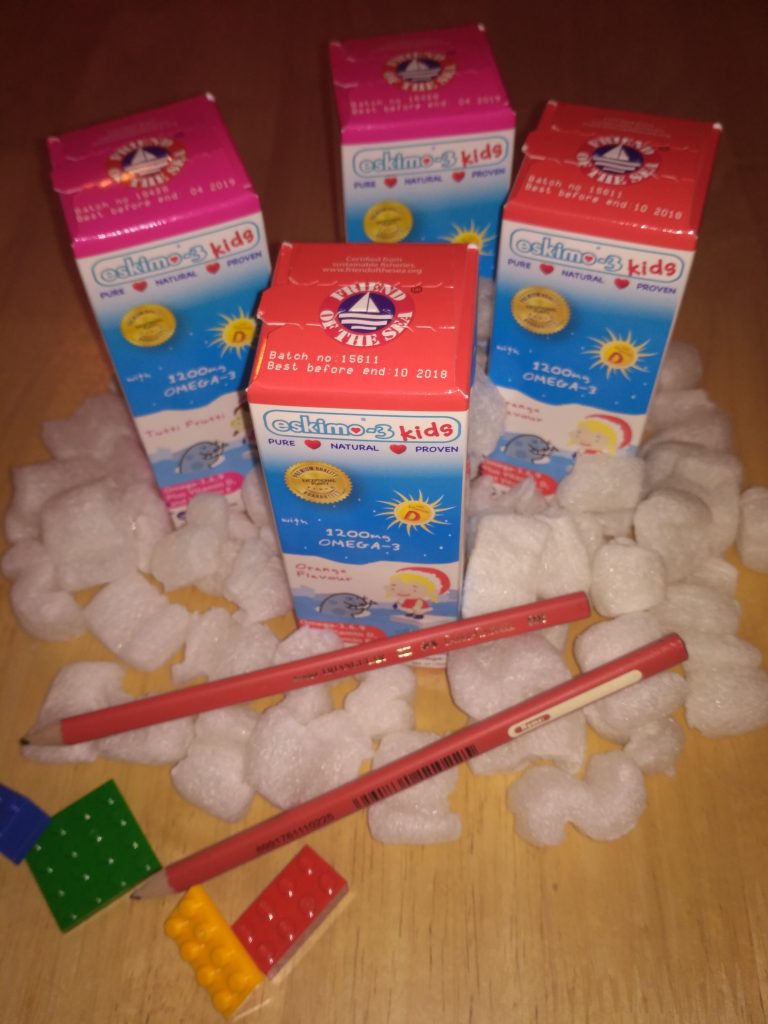 Thanks for reading and let me know if you have tried Eskimo 3 and what you thought of it?