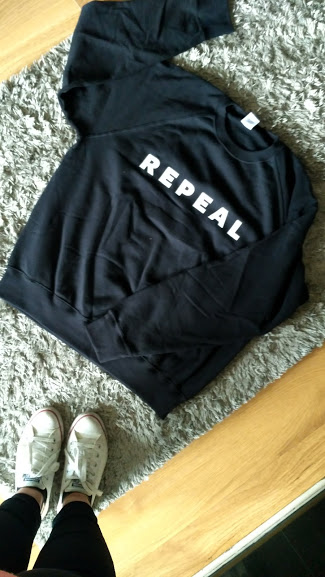 May 27th 2018 I woke up in a hotel in Dublin puffy eyed and exhilarated. The day before was spent looking at a huge  screen in the Intercontinental Hotel function room watching results from all 26 counties pouring in. At approx. 3.30pm the final tally from my own County Mayo came through, 57.7% in favour of repeal. I was just so so proud of my home county, they listened, they educated themselves and they showed they no longer wanted to hold on to the cruel and archaic law that was hurting, killing and scarring it’s women.

For the 231st time that day I cried. My own repeal journey was brief compared to the stalwarts that has been fighting since 1983, before and after the 8th amendment was put in place and during the 90s, 00s and in recent years.  I had the great pleasure of sitting alongside one of these legends Ailbhe Smyth at my first Together for Yes meeting in Sligo. 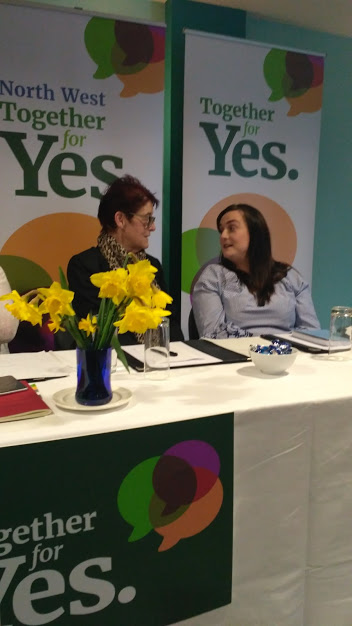 I never for one second thought I would ever be a part of history changing, when I first wrote Grace’s Story in 2017 I did it because I was angry, I was sad and I wanted people to know that this was happening to the ordinary woman who lives in your town, who serves you your coffee, who teaches your children, who does your hair…the 8th Amendment was damaging women all over this country. I never thought I would travel the country reliving her story on TV, radio and at so many important gatherings. Meeting the most amazing people, listening to their stories, crying alongside with them, handshakes, heartfelt hugs and sharing a mutual passion to change healthcare for our women and our girls. But I somehow ended up doing all these things and I always compared the feeling of being so supported compared to the absolute isolation myself and Kieran felt boarding that Ryanair flight to Liverpool in March 2014. When I felt empty or exhausted I drew on that anger I still had (and will always have) and I kept telling Grace’s Story, I picked up that microphone and I told her story once again, each time I told her story I would remember a new part, a part I had buried away and it would break me all over again. But like my sisters in TFMR we had to keep telling our stories, digging deep down for the strength and courage to keep talking, keep travelling and keep educating people. 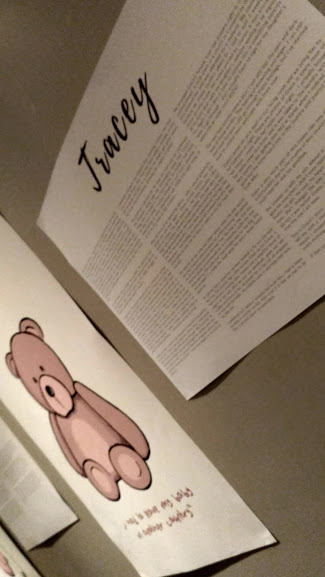 I first contacted TFMR in the 4 weeks I was waiting for an appointment in Liverpool to deliver Grace. They were and still are my main sources of support. I chatted to the girls and cried completely in the dark about what was going to happen us, from the little pieces of advice like bringing a blanket and teddy for Grace, to making sure I brought spare nightdresses because after you deliver your sleeping baby chances are you never want to see that nightdress again. I was just one woman they helped and supported from 2012 right up until today, thousands of phone calls, endless hours of supportive listening and caring embraces. I owe these women a gratitude, as does Ireland. From Arlette’s first interview with Ray Darcy to Claire addressing the Oireachtas Committee they helped shape the way people viewed what the 8th Amendment was actually doing to women and their families. I knew I had to do my part too, for the silent woman who could not speak out, I wanted to speak for her, feck it, I wanted to scream for her, LOUD!

My involvement didn’t happen by accident. Everyday Stories had been set up by Mary and Caoimhe and they were looking for personal stories of people affected by the 8th Amendment. I sent in that same blog post and Grace’s story and her little illustrated teddy travelled the country, people listened to my words through interactive stories. From this the amazing Yvonne and Amy-Rose from Together for Yes got in touch at the beginning of this year and the ball didn’t stop rolling until May 25th. 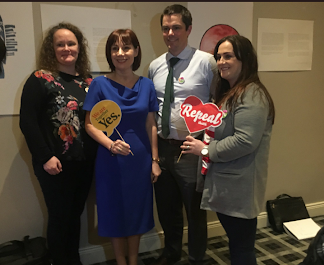 I had carried out some interviews previous to becoming involved in the campaign like the Irish Times , The Journal, Her.ie but I was safe behind the my words written by the journalist. I was asked to take part in some radio interviews, this was scary. Now it wasn’t just my words, it was my voice, my flat Mayo accent was going to be heard. My pain was going to be heard and my anger felt, there was going to be pauses where I would have to compose myself and swallow the huge sadness that was flowing down my face. My first Radio interview was with Philip Boucher-Hayes for RTE Radio 1 in March and it was the first time I watched someone’s reaction to my story. I went on the road with Together for Yes and told my story at launches and information meetings in Sligo, Roscommon, Westport and Athlone. Here is where I met some of the grassroots campaigners, the ones who had doors slammed in their faces, the ones who had been doing the donkey work in their rural towns and villages, the ones who won’t be named as heroes of the repeal movement on a public platform because they chose to stay in the background and keep plugging away… these are my repeal heroes.

The ones who helped people realise Roscommon was not the conservative county it was made out to be, the ones who had doorstep conversations in my home town of Ballina, these are my heroes. 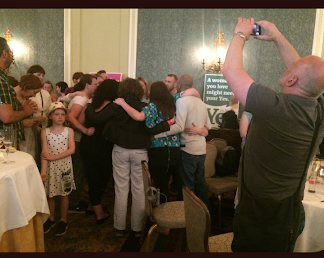 Like many campaigners our weekends were no longer spent with family but rather on the road, on our phones, campaigning and talking and I loved every second of it. The badges, the messages, the interviews, the discussions, the tears, the anger, the frustration, the debates, the flyers, the posters, the green, the pink, the country crawling from the doldrums of old Ireland and having a discussion they would have shut down 10 years before.

I felt the country change just as much as I felt the seasons change from spring to summer, yes, there were days when I thought fuck sake this may be lost, but with the support of my repealing family I got back on track.

I remember sitting in the back of a taxi on a warm Friday evening heading into the RTE TV studios and my stomach wanted to literally jump out of my body. Sitting in the green room with so many amazing amazing people, Jenni, Mark, Gerry, Siobhan and her mum it was surreal. I remember walking down the corridor with Mary from the other side to get our mics on thinking please let me get through this without breaking down. Sitting in my seat and watching Dr. Peter Boylan face off the other side with dignity and experience almost took my nerves away, almost. When the cameras stopped rolling I was so grateful I got through the interview!!

I often laugh as having a film crew turn up on my drive was becoming normal during those last few weeks! BBC and CNN were the last two to arrive to my semi-detached house in Mayo. I knew time was running out, the 25th was fast approaching if there was ANYTHING more I could do did it and that wasn’t just me, that was thousands of the repeal army, the pot was at boiling there was nothing more to do on the night of the 24th of May but turn down the heat and allow for a slow simmer until voting commenced.

We all know what happened that weekend, it will be forever etched on our memory. The faces of those people in Dublin Castle, the counters from both sides deep in concentration at the polling stations around Ireland,

TFMR quietly huddled in a corner of the function room sobbing collectively with pure relief, utter sadness and all the while carrying a lingering anger.

These are my memories of what was a crazy 6 months. I can only imagine what its like for those campaigning since 1983. It’s also a thank you, to every single one of you, who knocked on a door, took a leaflet, listened, had a conversation with a spouse, colleague or parent, stood in the lashings of rain at a stall, told their story publicly or to me privately, took absolute abuse from people, hung up a poster, wore a badge but especially to each and every one of you 1,429,981 who voted to stop punishing tragedy, to stop hurting women, to stop allowing women to die silently, to give women and girls choice, no matter WHY their decision. CHOICE. So to you from this ordinary mum of 5 from Mayo, thank you, to you from that lonely woman who boarded a flight to Liverpool almost 5 years ago scared, lonely and angry, thank you.

From my two daughters, a tiny one who was unable to meet her family due to the 8th amendment and the other who won’t have it affect her what-so-ever, thank you.